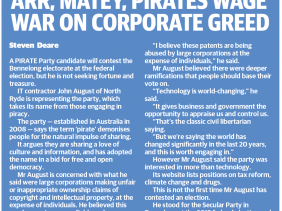 The their June 15th issue, the Northern District Times were kind enough to cover my candidacy, and the image with this article is an extract.

Writing a letter to the editor in the June 22nd issue, Jason Bolster writes :

I've been in touch with the editor of the Northern District Times, Colin Kerr, who will endeavour to publish my reply in the next issue. Nevertheless, I'll post the reply here. Mr Kerr was kind enough to endorse my coverage in my Permuations site in any case.

I write in reply to Mr. Bolster's letter of 22nd June. He focuses on creative output, which I'll get to. Still, I wonder if he recalls the controversy around patents on breast cancer tests based on the BRCA genes, or the attempts by tobacco companies for claim compensation from the Australian Government for plain paper packaging based on Hong Kong trade treaties? Or that in order to keep Mickey Mouse in copyright, the US Government extended copyright from the death of the author plus 50 years to 70 years? Do you think that inheritance makes authors and others any more creative? What about pharmaceutical companies who "evergreen" their patents, something Europe pushes back against, and what about the Patent Trolls who sit under bridges in the US? Did you know the author of Forest Gump did not want to approve a sequel, because the first movie did not make a profit? The use of creative ( or Hollywood ) accounting meant that movie makers that resent people copying their films could, without compunction, deny creative partners their fair share.

There are plenty of things to worry about when it comes to intellectual property.

Our party is not just about intellectual property - we want to support everyone with a basic minimum income. This frees up creators to - create. It gives people options. Our world is currently limiting, not just because of the constraints of funding artistic endeavour, but also the obligation to "work - or else".

In answer to Mr. Bolster's question, depending on the medium, creations can be copied at minimal cost, while food can only be eaten once. There are important differences. Nevertheless, creation should be supported. Mr. Bolster is unfamiliar with our policies, and jumps to the conclusion that there is only one way of supporting creativity.

I represent the Pirate Party. Last election was the Secular Party, much as Mr. Bolster incorrectly says I am "of the Secular Party". Well, we all make mistakes. Difference is, I try to be forgiving of others. In fact, I've had emails where I've replied suggesting that people vote for another candidate. I celebrate democracy, wishing all the other candidates the best of success, and hope Mr. Bolster will find someone he feels comfortable voting for.

I might also add that I see live bands in Sydney - directly supporting that creativity. One band member tells me they really don't mind their music being copied - it means that when they visit an obscure part of Europe, they have an audience for their live performances.

Jordan Peterson - the person, his works, his impacts

Jordan Peterson is a professor of Psychology at the University of Toronto. A controversial figure, he has attracted a great deal of criticism and attention.

While visiting my Aunt in Wollongong, one of her neighbours mentioned that he got up at 6am to watch Al-Jazeera news on SBS, where they were piping that through to their main broadcast, and that it gave an intriguingly "different" point of view.