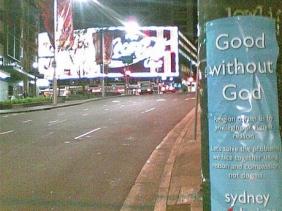 Back in 20008, the Catholics had their World [Catholic] Youth Day in Sydney. At the time, I wrote an article for Home Page Daily. You can't currently access it, so I've re-released it here. This was part 1 - in due course, I'll re-release part 2. At the time, I thought our experience might help activists operating against World Catholic Youth Days. Unfortunately, the days do skip around the world leaping language barriers, making this a bit more difficult. Still, here it is again. It was quite an experience to live through

The imminent World Catholic Youth Day has mobilised Sydney's activist and atheist communities. As NSW Humanists President, I ( John August) both watched and contributed to the activity leading up to the Pope's arrival.

Some have criticised religious belief as a problem in itself, but Humanists and many others focus on the structure and ideology of the Catholic Church without challenging belief. We think there's a right to believe whatever you want, but there's a problem when you try to impose that belief and its prescriptions on people around you. The Catholic Church limits freedom - women's access to contraceptives and abortion, and also voluntary euthanasia. While people have a right to meet and worship privately, the state resources allocated to World Catholic Youth Day (WCYD) makes it anything but a private affair - it undermines the separation of Church and State, accountability and democracy itself.

The supposed economic benefits have been diminishing - inner city retailers will see reduced trade, with staff working reduced hours. High end hotels have had a "double whammy" - the promised pilgrims have not booked in, and there's fewer Australian travelers because it's "all too hard". All that money. All that disruption. All those noxious regulations.  And its, er...worthwhile?

Carmelo Vescio, a non-practising Catholic filed a writ of summons on the 20th March with the High Court, challenging WCYD expenditure as violating section 116 of the constitution, on Australian separation of Church and State. It was watered down by the "Defence of Government Schools" case in 1981, but that's another story...

Justice Susan Crennan rejected it, saying it was "political in nature". But surely constitutional issues are "political" regardless? Political difficulties bring them to the high court. How else do they get there? I mean, WTF? Australian High Court Justice Michael Kirby, however, endorsed the writ. Bully for him. This challenge faltered further on, but good effort in any case.

One focus of the anti-WCYD activism has been the Sydney Atheists. While it seems that trying to coordinate atheists is like herding cats, the meetings have had an aura. "Wow... we're cooperating"...  and we look at each other in surprise. With churches dotted around Sydney like post offices, the religious previously had an advantage. The internet now means people can locate each other and work towards common goals.

There's Sydney Atheists T-shirts with captions like "No Gods Now... ask me how", "Godless and Happy", "Reality is what persists when you stop believing in it" and "Good without God". Atheists plan to wait with an atheists flag (with a big red "A" - originated by Richard Dawkins) at the Harbour Bridge to greet pilgrims walking over it, and have a "heretics BBQ" during a WCYD mass. The "Black Operations" unit has tasked itself with putting up posters and making footpath stencils.

But of course there's been contributions from other individuals, political parties and groups. In the leadup, Frank Gomez printed "Sponsor a Lion" stickers, which have been spotted around Sydney. One sticker on the atheist "PopeMobile" reads "Eat my dust, Chaser!". Indeed. There's no monopoly on being the court jester!

Yes, atheists have their own PopeMobile, constructed for the "World Truth Day" campaign by engineer Ian Bryce. It has a perspex shroud containing a mannequin of the pope, talking to God on his gold telephone. It's waterproof and fits on a car's roof rack. Ian's position emphasises the sad history of the Catholic Church - the Inquisition, along with more recent problems - including paedophilia. This is the truth that should be out there.

I was a passenger on one Sydney run of the PopeMobile. We had 10 supporters for everyone who disagreed. Many even took photos! I've been so used to fighting the good fight - making an effort, but mostly being ignored. But we were connecting! People taking photos to pass onto others. It was going viral! A meme, an idea, spreading through the community... We haven't had this sort of activism for decades - people seemed to really warm to it. We in the movement know about these issues intimately - but for the general public, we were a novelty, a discovery.  Many people who spoke to us were aware of the Government's new "annoyance" regulations (they've not been introduced in parliament - only then, IIUC, do they become "laws") - I wondered if they'd really scored an "own goal". Right on cue, Ian received a call from the police, wanting to arrange an interview. That was in contrast to a policewoman who later laughed as she saw us go past. The Man had definitely turned on his radar!

Then there's the "NoToPope" coalition, spearheaded by Community Action Against Homophobia. The Secular Party, NSW Humanists and Sydney Atheists joined it, amongst others - including some Christian groups and also the Raelians. This coalition held a media conference outside Parliament House last week, challenging the "annoyance" regulations and outlining their position.

Rachel, their spokesperson, pointed to the Pope calling homosexuality an "objective disorder", and how Catholic Church condom policies were contributing to the spread of AIDS, not to mention its denial of women's reproductive rights. However, she did not target individual believers, and was looking forward to engaging with them - constructively and peacefully - and handing out condoms as part of their campaign.

Rachel noted that many people within the Catholic church are pro-gay and/or pro-contraception and abortion - but otherwise identify themselves as Catholics. The issue was not with individuals or their beliefs. We also had a speaker from the NSW Council of Civil Liberties, who was himself hosting pilgrims! However, the introduction of these regulations incensed them enough to put themselves on record against them.

Our plans have been made. The Man has turned on his radar. And we've turned ours on, too.