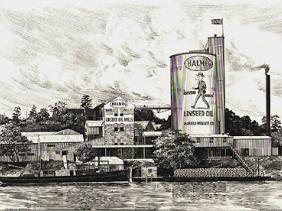 This article first appeared in The Ryde Recorder, newsletter of the Ryde District Historical Society, back around December 2007

But in times past, we lived close to industry, it was on our doorstep. And what was that industry ? The 1992 book "Then and Now", a collection of photos around Ryde, has a photo of the Halmeg linseed oil extraction plant at Punt Road Gladesville, which closed in 1974. Harold Meggitt established the plant in 1923, and so we see the name of the plant. A photo accompanying the article appears courtesy of Ryde Library Service, who hold copyright.

But along the river there were many industries - a paint factory, tannery and an abbatoir. The toxins they generated have found their way to the bottom of the river, and still haunt us. The meat waste from the abbatoir attracted sharks upstream - presumably still salty enough for the sharks at that point.

But - Linseed Oil ! Important enough to have a factory extracting it ! And today, Linseed oil is but another oil, of no particular significance. But it found use in paint, putty, and finishing wooden products. And it can be used in feeds, textiles and treating leathers.

But paint is not just oil based, and makes use of synthetic resins. The world did move on. But what finally made the Halmeg plant close ? Problems with pollution of the river, a declining market for Linseed oil, or what ? I don't know.

For, back then we had a different economy. At society meetings, I've seen the ceramic containers used to convey ginger beer - proclaiming they were owned by the manufacturer, and should be returned ! Once upon a time, we did have returnable bottles, and now the most we do is recycle rather than re-use - but in times past, companies felt the need to own the containers their produce came in ! Many things were (in relative terms) "worth" a lot more back then. Particularly containers. Anything you would form into a shape was not cheap - not disposable.

Our world has changed in many ways. But it is amazing to reflect on times past.