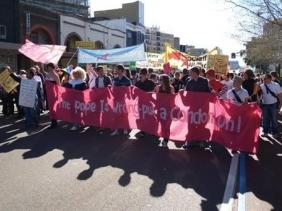 Here's part 2 of the article that I wrote on the the protests against the World Catholic Youth Day. It was originally in Home Page Daily, but no longer accessible there. So, I'll continue ...
The Catholic Church's World Youth Day celebrations in Sydney received saturation media coverage in Australia but even though heavily outnumbered, various groups protested the event including Sydney Atheists. In the thick of the activist action JOHN AUGUST shares his experiences of the week that was.

Posters appeared around Sydney, and the NoToPope (NTP) coalition pursued press releases and legal challenges. The Atheist Foundation had their "Pied Piper of Vatican" cartoon in Sydney and various other Australian newspapers. We even had a meeting between the Sydney Atheists and some World Youth Day organisers in a local pub. Quite an experience. I can hardly do it justice, but I do remember an organiser seeing that our gripes were detailed and thought through - not the result of a few bad experiences in youth, or some half remembered anecdotes.

A first legal development was that the "Annoyance" laws were thrown out because they were too vague. There was some hand wringing over the main NoToPope protest. Originally the police's demands included obeying all police directions, not having offensive placards, and not handing out material - but the police relented.

We had international interest - from AFP Global News Agenda, Al Jazeera, and the BBC world service. The Italian group "No Vat" joined our coalition. At the March 19th protest, I was interviewed by Polish TV and SBS radio about the World Truth Day Popemobile.

Some SMH coverage on the Popemobile While visiting the WCYD site at North Sydney earlier that week, The Man told the police to swoop. Ian was retained in his vehicle till the highway police arrived - who went over his vehicle "with a fine toothed comb" looking for defects. Apart from the shroud itself they couldn't find any. It was designed for speeds of 50-60k, but the police said it had to withstand 100k. Eventually, after checking on the radio, they came up with the offence "Having a rooftop ornament likely to distract drivers". What about all that vehicle borne advertising?

Police didn't use the "annoyance" laws (or regulations, or whatever) - which were in force at the time - rather using existing laws as square pegs in round holes. Perhaps they thought the controversy would just feed our cause.

With the PopeMobile off the road, we thought we'd display it in Martin Place - a Sydney CBD mall which leads to the NSW Parliament House. After 45 minutes though, 4 or 5 police moved in. The police had been to finishing school - you almost hear them thinking "don't antagonise a situation any more than necessary" - they gave us a "move on" order - no fine or ticket - so long as we didn't come back!

In contrast (assuming they weren't all playing mind games together), the City Rangers were a bit "aggro", claiming we'd deliberately put up an unlicensed structure which could obstruct the public - they could trip over it and sue council. They said they'd post me a ticket with a fine.

My brain was going into meltdown and I barely heard them. However, absorbing this attack meant my associate Tynan could continue to function effectively, cheerily engaging with the public till our trailer arrived. And certainly, the police accepted the vehicle was twenty minutes or so away and did not insist on us moving the pope to a side street in the meantime.

When Tynan wasn't talking to pilgrims, saying "Hi! I'm an atheist, welcome to Sydney, would you like a chuppa chup?", he was telling the public "The police don't want us here, and we're cooperating with their move on order". In fact, Tynan and the police together generated more interest - till the police realised it and moved back.

While leaving, the Rangers took numerous photos, and ticketed our vehicle with a "Special Event Clearway" parking infringement - without warning - while the motor was on and the hazard lights going. The Man was getting aggro. Anyway, we figured out we could park the trailer, uncover the pope, and attract passerby. Pilgrims even took photos and talked to us. It would have added to their experience.

Sydney was the site of the most activity - but, hey - the pope was here! Melbourne saw a protest organised by their own energetic atheist Jason Ball, convenor of the University of Melbourne Secular Society - apparently the police were very supportive and cooperative. An event in Perth was organised by Mother Gretta of the Black Swan Perth City House of the Sisters of Perpetual Indulgence. A "Kiss a Queer for Christ's Sake" event in Adelaide event was organised by activist Troy-Anthony Baylis - and there were probably events in other cities too.

Saturday 19th July was the day of the pilgrimage walk over the Harbour Bridge to Randwick Racecourse.  - Sydney Atheists were there to greet them in the early morning from Observatory Hill (nearby and within sight of the Harbour Bridge), with the pilgrims shouting "God loves you" and the response "Where's the evidence?". Atheists also sung Always look on the bright side of life.

Later that day, the NoToPope coalition gathered at Taylor Square, and heard from many speakers - including "Broken Rites", representing those affected by Catholic Church paedophilia, and also Pope Alice - still another one! Some Sydney Atheists were saddened by the Raelian's disproportionate presence. Is the issue believing in nonsense, or having coercive and intolerant approaches which derive from that nonsense? Sure, OK, include all groups against the Catholic Church - but big loud signs from the Raelians right next to the stage? Sigh.

But focusing on the positive... The procession left for Moore Park at 1.30, led by the World Truth Day PopeMobile, the pope now in the back of a ute. On the way back, Cardinal Titi Chartay Immaculata Deceptionata of The Order of Perpetual Indulgence in Sydney was a passenger. Sorta appropriate, really.

We walked in a sea of signs - some from the Metropolitan Community Church read "Would Jesus Discriminate?".  Others proclaimed the Catholic Church was suppressing women's reproductive freedoms. And there were T-shirts saying "I was touched by the pope down under".

At Moore Park, we lined the perimeter as the Pilgrims went by on Anzac Parade. There were more police at Moore park. They were standing in lines or behind bicycles, with a buffer zone between us and the pilgrims maintained by police and mounted police in the background. Nevertheless, we didn't cause any incidents.  One pilgrim got a punch in on one of the protesters - he was restrained by police and taken away - though it seems the charges were dropped. (To be fair on overseas pilgrims, it seems he was from Newcastle, north of Sydney).  We were waving at the passing crowd, with some waving back. Sometimes the chant "The pope is wrong - put a condom on!" rose up.  Some pilgrims were throwing what was presumably holy water at us.

Earlier in the week, though, a group of Pilgrims threw "holy water" - unprovoked - on a train passenger in Queensland, and a woman handing out condoms in Sydney was surrounded by American pilgrims pointing at her and chanting "go - a - way".  Jason Ball in Melbourne received harassing email, and the forum attached to the NTP website was shut down from too many disruptive posts.

So there was some hostility. Trev (a fellow Sydney Atheist) said a few pilgrims gave him the finger and said "fuck atheists" at the march. Nevertheless, it was an amazing sight to see all the pilgrims go past.  We certainly made our point. And, overall, considering the whole week or so, it was certainly impressive to have so many people together who were for the most part well behaved.

On the following day, Sydney Atheists met at Centennial Park for a "Heretics BBQ" - a celebration and wind down. It was now time to turn off the radar. To listen to the fans whir down, and watch the warm red glow from the vacuum tubes fade away.

Till we need to turn it on again...